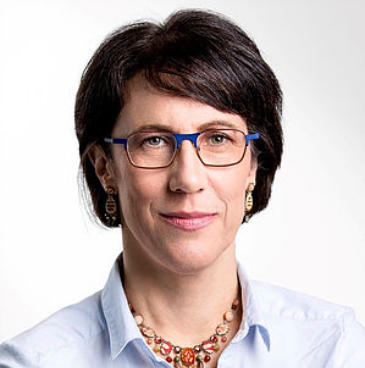 Wendy Singer has served as Executive Director of Start-Up Nation Central since its founding in 2013. She worked with its US-based philanthropists to build the infrastructure and professional team in Israel, and to launch its initial activities – connecting Israel’s innovation ecosystem with government and business leaders all around the world. 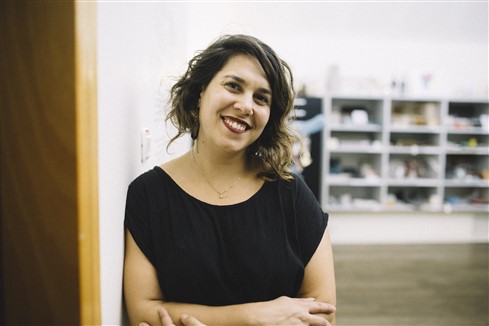 Inbal is the Jerusalem Ecosystem Manager at Start-Up Nation Central.

Born and raised in Jerusalem, Inbal brings her passion for the city to her career as both a Tech and Social Entrepreneur. She works across sectors with people, communities, and organizations to strengthen their capacity and achieve their goals.

Prior to joining SNC, Inbal was the Marketing and Operations Director at StellarNova, a company that creates gender balanced STEM products. She has managed numerous international conferences for young leadership such as the ROI Summit, she was the Community and Partnerships Coordinator at New-Spirit NGO, and was one of the leaders of the 2011 Israeli Social Protest Movement. She is passionate about Impact and Diversity and is the co-founder of the Open Holidays festival in Jerusalem and a founding member of the TOM:Tikkun-Olam-Makers community.

Inbal holds a BA in Psychology and Social Justice, as well as an MA in Organizational Consulting and Life Coaching. 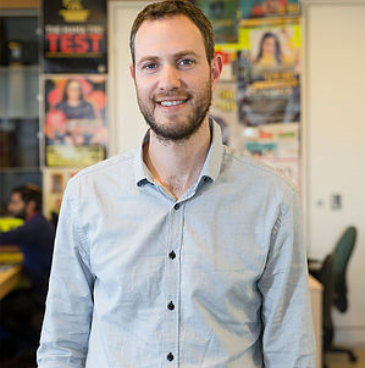 Oded is the Ecosystem Partnerships Manager at fresh.fund, a leading pre-seed venture fund investing in Israeli startups across verticals and segments. Prior to joining fresh.fund, Oded led and was involved in initiatives that helped develop Jerusalem's innovation ecosystem including Siftech, the city's first startup accelerator and Jnext, a governmental<>municipal project of the Jerusalem Development Authority for growing the city's tech ecosystem.

He holds a B.A in Political Science and Business from The Hebrew University of Jerusalem and a M.DES in Industrial Design (Design Management and Innovation track) from Bezalel Academy of Art & Design. 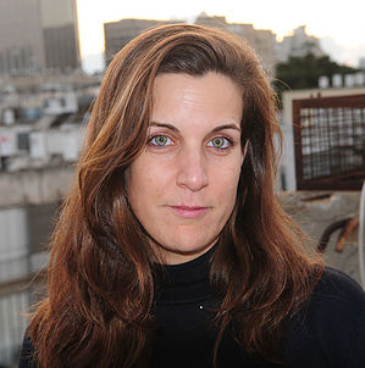 Dr. Romi Mikulinsky researches and lectures about digital and counter-culture, algorithmic art, as well as design-led innovation. She has worked with start-up companies, corporations, municipalities, and media websites on the implementation of technological innovation, and has led design and innovation workshops worldwide. Romi served as the Director of the Shpilman Institute for Photography and worked with an array of art museums in Israel. 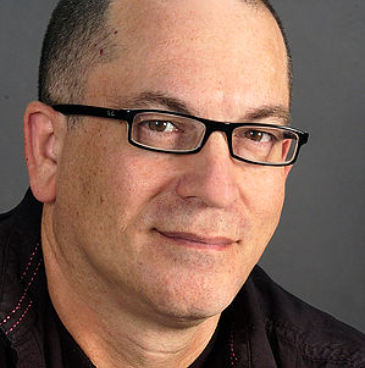 Dr. Amnon Dekel is an applied researcher and product professional focusing on the meeting point between the physical world, computation, and information services enabled over digital networks. His passion is to enable engineers and designers to work in a synergistic fashion in creating successful and innovative products. Amnon is an active member of the Tech Meets Design content committee. 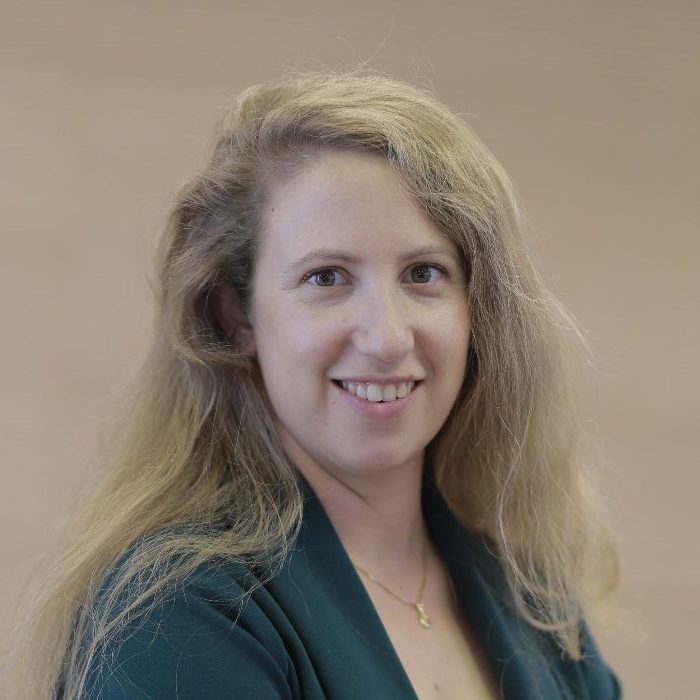 Ayelet Cohen is the Deputy Director of HUJI-Innovate. Prior to this, she served as the director of Jerusalem activities at Start-Up Nation Central, leading a strategic project to develop the Jerusalem tech ecosystem. Ayelet also co-founded and managed Google Educators' Groups and Google Teacher Academy in Israel.
In addition to her work, she is a social entrepreneur and founded several initiatives such as Dada, 30ish and #53poems. Ayelet holds a BA from the Hebrew University in Jerusalem, majoring in Jewish History and Political Science. 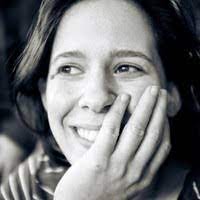 Alona has served in senior product management positions in a number of consumer and manufacturing companies in Israel and the U.S. She taught design thinking & prototyping in the Masters program at Bezalel Academy of Art, is a mentor and speaker at Mass Challenge Jerusalem, and is a regular speaker at the Delta Pre-Accelerator class at Tel Aviv University. She has an MBA from MIT with a focus on marketing and operations, and a B.A. from the University of Chicago where she studied Economics and Public Policy.

Outside of work, Alona enjoys spending time with her husband, Gilli, her 4.5 year old son Asher, and her big-eared dog, Amalia. She can usually be found with her nose in a book and is most excited about her recent local finds for herring and kombucha. 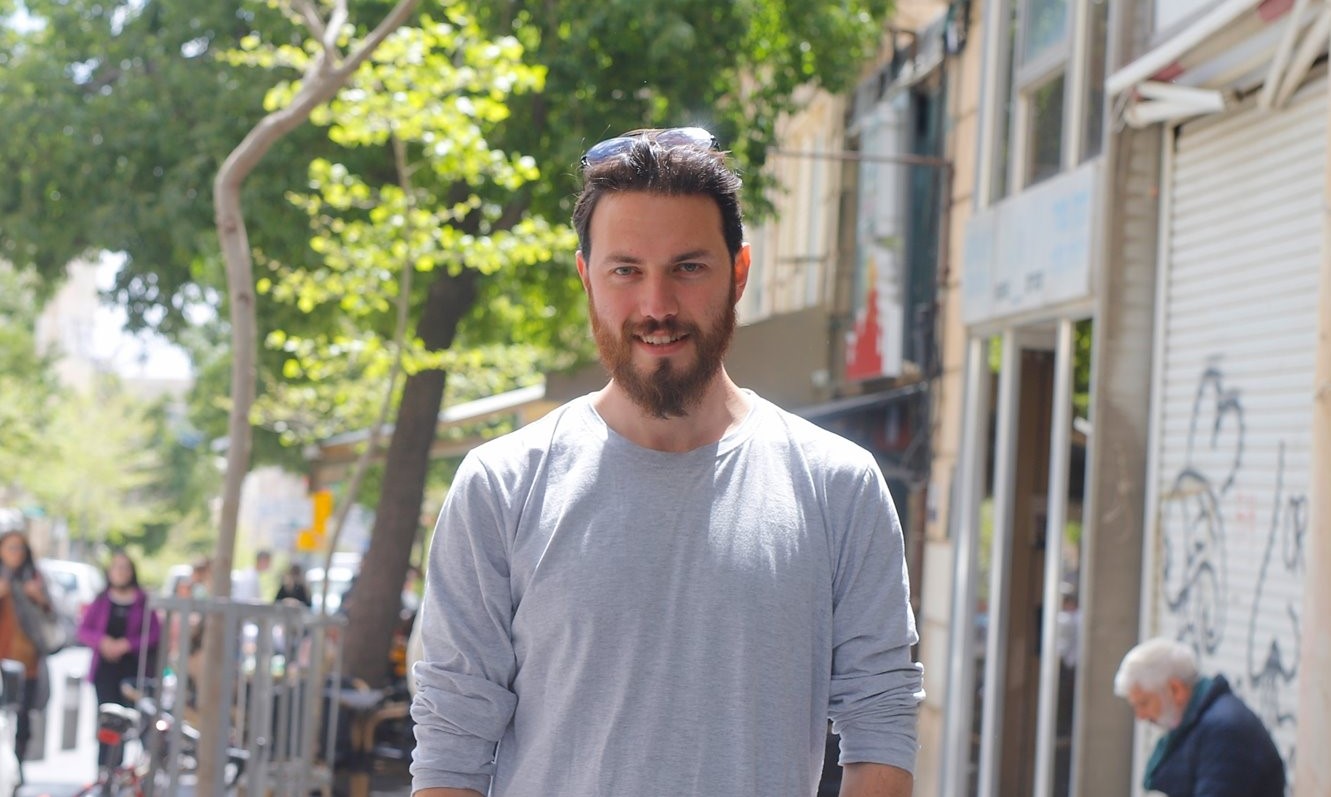 Yossi was born to a Hasidic family in Jerusalem. At the age of 10, his family relocated to New York where they lived for several years. The experience caused Yossi to realize how closed off his Israeli community was. Upon his return to Israel, he realized he could no longer identify with the extreme worldview in which he was raised, and decided he would eventually leave the Haredi (ultra-Orthodox) world.

Together with his new outlook came an urge to fight for his vision of a better society. As part of his commitment to improve Israeli society, Yossi served in the IDF’s Haredi Integration Unit, which was responsible for writing the new Haredi draft bill.

As a civilian, Yossi volunteered as the spokesperson of the political movement Hitorerut, and worked tirelessly alongside his associates to improve the quality of living for all residents of Jerusalem. In 2015, Yossi helped create “The Israeli Cartoon Project,” a public diplomacy initiative that recruited dozens of cartoonists from Israel and abroad to combat the BDS movement. While he was co-founding TICP, Yossi was already volunteering with Out for Change, a nonprofit that offers a comprehensive and holistic approach to assisting people who choose to leave the Haredi lifestyle. Starting as a spokesperson, Yossi later assumed a senior position within the organization. Today Yossi is the CEO of New Spirit Jerusalem, an organization that aspires to strengthen Jerusalem and turn it into an inspirational capital city. 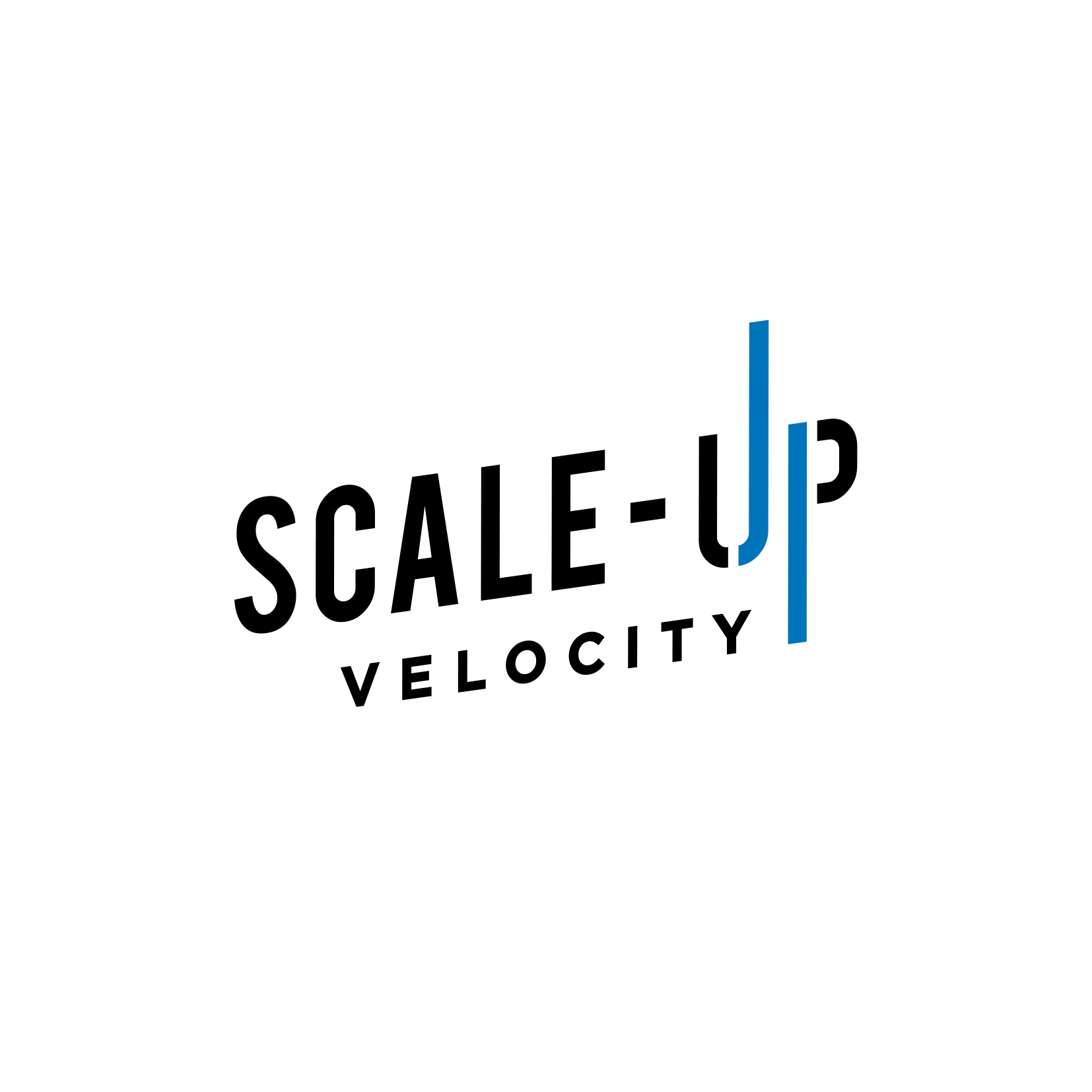 The Jerusalem Development Authority is a statutory corporation which was established by law in 1988. Its functions are to promote, plan and encourage the economic development of Jerusalem, to coordinate between government offices, authorities and bodies involved in the development of Jerusalem, and to advise and supply information connected to entrepreneurial initiatives, plans and commercial ventures in Jerusalem.
Read More

The Ministry of Jerusalem Affairs and Heritage is a government ministry in the Israeli cabinet. The Ministry is primarily responsible for developing tangible and intangible national heritage assets, preserving content of national historical importance while making them accessible to the public, and encouraging the assimilation of national heritage into the education system.
Read More 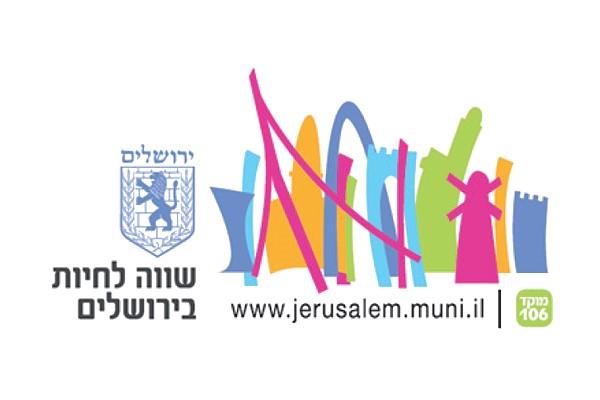 Bezalel Academy of Arts and Design, Jerusalem is Israel’s oldest institute of higher education and leading design academy, with more than 2500 undergraduate and postgraduate students studying a range of subjects from fine art and photography to industrial design and architecture. Bezalel's faculty of 550 teachers takes pride in the generations of graduates working at the cutting edge of their fields both in Israel and abroad.
Bezalel, Academy as a research institution, is unique in its ability to combine basic and applied research in various design fields ranging from ceramics and industrial design to visual communication and art. Bezalel Academy plays a leading role in spearheading Israeli culture, art and design, and is at the forefront of the discussion between Israel’s creative industries and its creative economy.
Read More

The Hebrew University of Jerusalem

The Hebrew University of Jerusalem, founded in 1918 and opened officially in 1925, is Israel’s premier university as well as its leading research institution. The Hebrew University is ranked internationally among the world’s 100 leading universities, and is first among Israeli universities. The recognition that Hebrew University has attained confirms its reputation for excellence and its leading role in the scientific community. It stresses excellence and offers a wide array of study opportunities in the humanities, social sciences, exact sciences and medicine. The university encourages multi-disciplinary activities in Israel and overseas and serves as a bridge between academic research and its social and industrial applications. The Hebrew University has set as its goals the training of public, scientific, educational and professional leadership; the preservation of and research into Jewish, cultural, spiritual and intellectual traditions; and the expansion of the boundaries of knowledge for the benefit of all humanity.
Read More 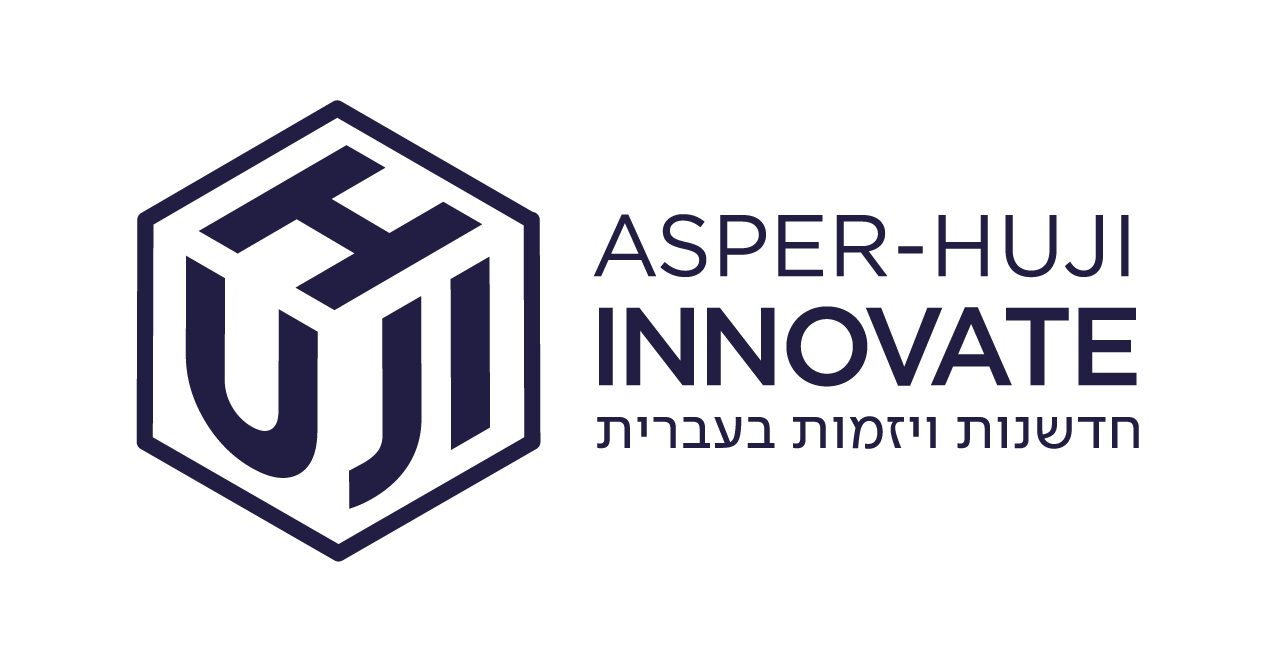 Asper-HUJI Innovate is the Hebrew University’s platform to encourage and assist students, faculty and alumni to develop their innovation and entrepreneurship capabilities. We support HUJI’s 23,000 students and faculty in the ideation and development of new solutions for real-world problems, while fostering a vibrant ecosystem that helps accelerate the creation of new ventures.
Read More

Azrieli College of Engineering Jerusalem was founded to support a broader strategy to strengthen the City of Jerusalem by training engineers for the city’s high-tech industry. Our mission is to combine rigorous academic study with hands-on training that is industrially relevant locally and globally. We fulfill our mission by: tapping into the creativity and ingenuity inherent to the City of Jerusalem; positioning young people for excellence and providing them the tools to succeed; and developing relevant curricula in collaboration with the college’s industry partners and other institutions of higher education.
Read More 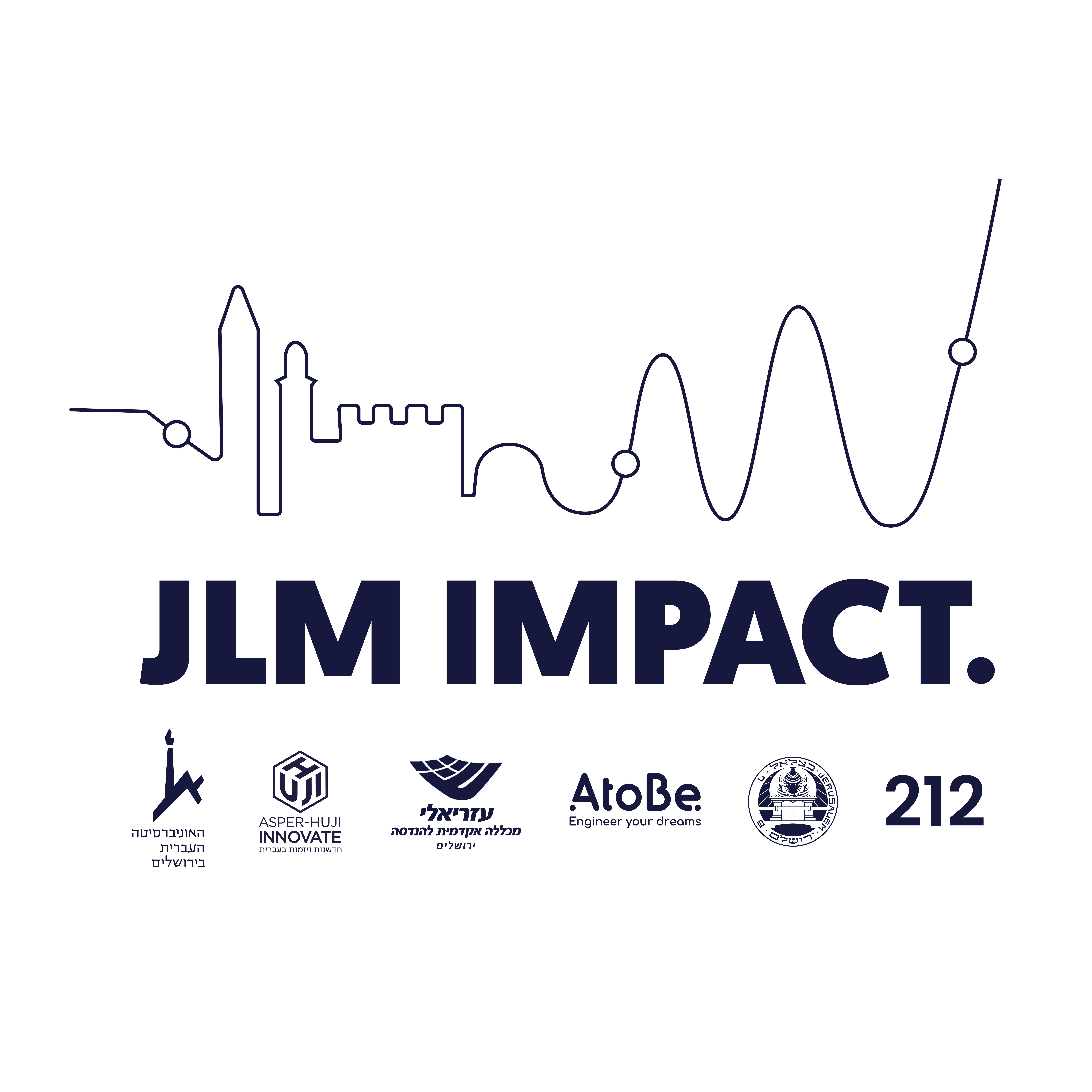 The JLM-Impact Consortium is a consortium designed to boost entrepreneurial activity among the city’s students and academic community. The consortium includes The Hebrew University of Jerusalem, Bezalel Academy of Art and Design, Jerusalem, and Azrieli College of Engineering, Jerusalem.
Read More 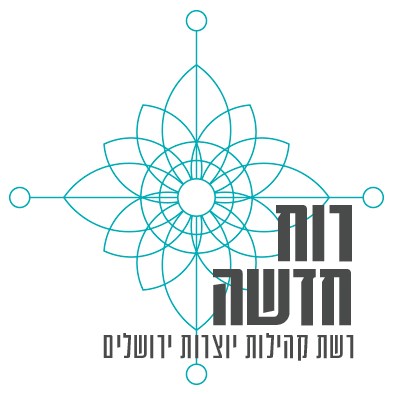 New Spirit works for and with the young people of Jerusalem - via the realms of art/design/culture/leisure and business opportunities. The goal is to strengthen the City of Jerusalem into a place that will be attractive and relevant to young people, and reinforcing its role as a leading cultural and economic center, as befits the capital of Israel.
Read More 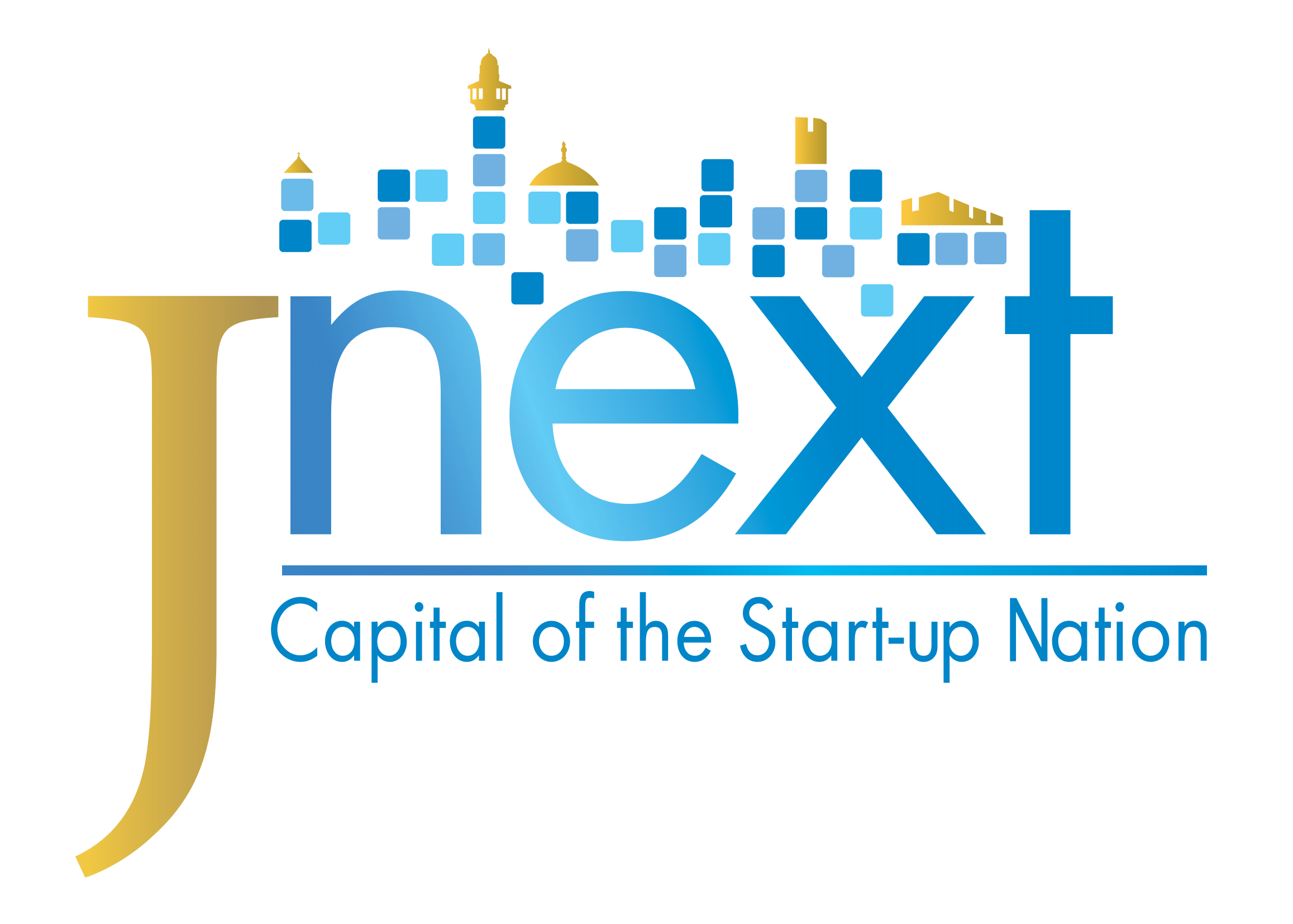 Jnext is a governmental initiative aimed at developing and supporting the innovation ecosystem. JNext operates by directly assisting startup companies and fostering an entrepreneurial environment, in order to transform Jerusalem into a startup-friendly city. Jnext was established as a joint-partnership between The Ministry of Jerusalem and Heritage and The Jerusalem Municipality, and is led by The Jerusalem Development Authority.
Read More